Difference between revisions of "Visual Optics"

Visual Optics is a term introduced to gemology by Alan Hodgkinson. It describes the technique of extracting valuable information from a gemstone just by looking through it towards a point light. Alan was sitting in his car one night, waiting in the presence of a box of reference stones, when he started looking through them towards a street light. The phenomena he observed proved to be in direct relation with the gemstone's RI and dispersion. The subject was studied further and his findings were shared through his book 'Visual Optics' which was first published in 1979. 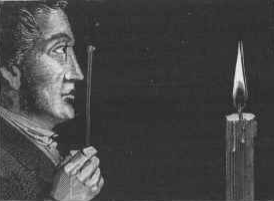 Woodcut from Dieulafait, 1874, ("Diamonds and precious stones") of a man doing “Visual Optics”.
The technique with which a gemologist can estimate a gemstone's RI by eye & light alone is aptly called The Hodgkinson Method. It works by pattern recognition and, with practice, may lead to positive ID's of gemstones by anybody that is willing to take the time to master the technique.

The Hodkinson Method hasn't been adopted into the curricula of the big gemology schools. One may wonder why, the easiness and usefulness of the method are evident.

Gemologists from the past have used this method but it appears that it was solely used to distinguish double refractive stones from single refractive ones. One reference is found in a book written by Dieulafait which was published in 1874 titled 'Diamonds and precious stones. The text describes the method in order to determine the refractive nature of a stone by checking for object doubling when looking through it towards a flame or object.

Next: The Hodgkinson Method