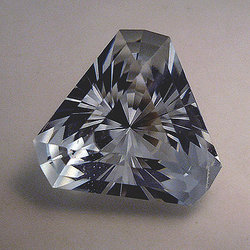 This is a very easy design to cut for the pattern in pieces of rough calling for a triangle shape. I like very much the A. Wolkonsky's design concept of the "minibarion", so I tried to follow this concept to draw a design of a triangle minibarion, with the tips truncated by two segments. After cutting my test-stone I found an almost identical design had been made quite a few years before mine by B. Johnson (published in the October issue of "Facets", according to my DataVue2 source). The only differences I can see are the table meets and the crown angles. I tried to optimize my crown angles to have higher values without sacrificing too much of the light return, with a BOG optimization. This is to enhance the nice reflections pattern, which is what I was looking to get.

Being a simple cut, probably it should be cut in small stones (but pay attention to the last tier of the crown, there it is very easy to overcut!), but I cut a pretty large test-stone and I'm satisfied as well, also because the fan-like reflections on the sides are even more evident. So I guess this design would perform well with stones of any reasonable size.