Sheen is the effect caused by reflection of light from below the surface of the gemstone (whereas luster is on the surface). There are several terms associated with sheen (listed below). Their causes can range from inclusions to internal structures and interference to reflection and refraction. 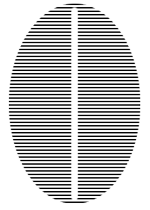 Formation of a cat's eye (streak at 90° to the inclusions)

This type of sheen occurs on gemstones with parallel orientated inclusions, like fibers, needles and hollow tubes. The effect of the reflection on these parallel arranged needles, fibers or hollow tubes is a light streak which runs at a 90° angle over the inclusions. In order for this effect to be seen, the gemstone needs to be cut en-cabochon.

Naming these types of gemstones is generally done with the suffix Cat's-Eye, as in Alexandrite Cat's-Eye.

Famous examples of this type of sheen are Chrysoberyl Cat's-Eye (or "Cymophane") and Tiger's-Eye (Quartz with asbestos fibers).

Other gemstones that may show chatoyancy are: 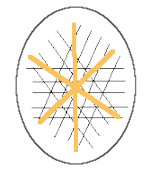 Formation of a star (streaks at 90° to the inclusions)

Asterism, like chatoyancy, is caused by reflection on inclusions. However, the inclusions are arranged in different directions causing several streaks of light on the surface of the en-cabochon stone. In general, the inclusions which cause the stars are orientated parallel to the crystal faces. There can be 4-pointed, 6-pointed and 12-pointed stars.

Diasterism is asterism caused by transmitted light (from behind the stone) and can be seen in some Rose Quartz and Almandine Garnet. Asterism due to reflected light is named epiasterism, an example being 12-pointed Corundum.

Corundum usually forms 6-pointed stars (mostly due to rutile or hematite needles). Emerald has been reported to show a 6-pointed star.

You may also find in Corundum (usually in Thai sapphire) a 12-pointed star due to rutile and hematite inclusions following both the 1st order and the 2nd order prism. This is an example of epiasterism (due to reflected light).

Synthetic corundum may also show asterism. Usually the stars are much better defined than their natural counterparts.

Some stones, especially corundum, have orientated inclusions but in insufficient quantities to show a star. These stones are generally facetted and occasionally you may see light reflected from small groups of such inclusions. This effect is termed ‘‘silk.

We describe stones that show asterism with the prefix Star as in Star-Emerald.

Some gemstones that may show asterism:

Iridescence is the play of color, or a series of colors, produced by interference or diffraction (or both), either when light is reflected from thin films (inclusions), twinning planes or from the unique structure of precious opal.

There are several types of iridescence that have their own particular causes:

Labradorescence is the effect seen in Labradorite (a Feldspar) and Spectrolite (a Labradorite found in Finland). It is caused by interference on the boundaries of lamellar twin planes, which are usual in Feldspars. Many Labradorites are carved to exploit this unique type of sheen.

This type of sheen is exhibited in Moonstone (another Feldspar), caused by reflection on Moonstone's lamellar twinning planes. The effect is a blue color floating just below the surface of the stone. Adularescence is also known as Schiller.

Aventurescence is named after Aventurine Feldspar, which is also known as Sunstone. This type of iridescence is due to the play of color caused by reflection on tiny, thin inclusions of goethite and hematite (or both). This gives the stone a golden or reddish-brown color and specular reflections. 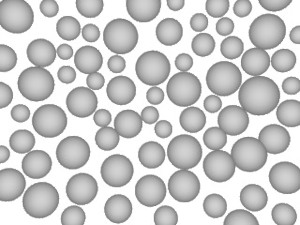 The causes of play of color in Opal were long uncertain until the invention of the electron microscope. This enabled scientists to see the unique structure of Opal at high magnification, and to discover that Opal is made up of small spheres of silica.

In Opal, both interference and diffraction play a role in the play of color. Interference occurs when part of the light gets reflected from the surface of a silica sphere while another part gets refracted inside the sphere, being reflected again. Diffraction in Opal is the result of light hitting a gap between the spheres and then being split up into its spectral components.

In precious Opal, larger silica spheres of about 350 µm (micro meters) in diameter give off red flashes with changes in viewing angles. The smaller spheres result in green, blue or purple flashes which cannot increase in wavelength to give a red flash. Therefore, the sizes of the 'gaps', or 'voids', determine which color is seen.

This is the same way diffraction grating material functions, of which some spectroscopes are made.