The beauty of a gemstone depends almost entirely upon the way it interacts with the light. The fire of a Diamond and the play of colors in an Opal are just two examples.

Scientists recognize two different theories to explain the way in which light is transmitted:

Both theories are important to learn so you may understand the causes of color in gemstones.

This theory, developed by Dutch scientist Christian Huygens (1629-1695) and later explored by others, states that light is a form of energy traveling in a wave motion. 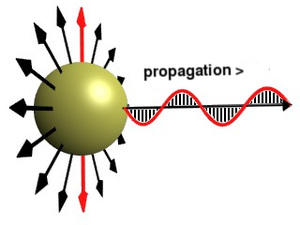 The wave motions of light travel from its source in all directions. It can be compared to what happens when you throw a brick in a puddle of water: the water's surface starts to vibrate and these vibrations cause transversal waves. Transversal waves vibrate in the direction (like up and down) perpendicular to the direction in which the wave propagates.

Note: although we can't see light we can see color. This is caused by absorption.

There is a relationship between wavelength and color of light, which is explained by what we call the electromagnetic spectrum. Red light travels at a wavelength between 740 and 625nm, blue light between approx. 420 and 380nm.

Wavelength is measured in nanometers (nm), which is one-billionth of a meter. (An older measurement unit is Ångström, which equals 10nm, but this unit is no longer used.)

The amplitude of a wave defines the intensity of the color. The higher the amplitude, the more intense the color. If there is almost no amplitude in the wave, then the color will be almost to entirely black.

This theory was developed by Max Planck and Albert Einstein. It states that light energy can be absorbed and emitted only in small and discrete amounts, called "quanta" (later known as "photons"). This theory is used to explain certain causes of color in gemstones and the phenomenon of fluorescence.

Fluorescence is the emission of visible light by a substance, such as a gemstone, when irradiated by energy of a wavelentgh shorter than the emitted wavelength. Some rubies can be made to glow like red-hot coals when they are bombarded by ultraviolet radiations.

This theory is very important when explaining the causes of color in gemstones, which is primarily due to absorption of energy (from the photons) and the emitting of that energy.

The image shows that a photon seems to have a constant amplitude and frequency, yet in reality this is not the case. From a gemological point of view, we assume it does.

Although Einstein never did like the quantum theory, he was the founder of it with his famous equation:

It was mainly for this (which solved the photoelectric effect) that he was awarded the Nobel Prize in physics (1921), not for his Relativity Theory.

The electromagnetic spectrum consists of the entire range of wavelengths, from the longest radio waves through continually shortening wavelengths, to infrared, visible light, ultraviolet and X-rays. And finally the shortest waves of all, cosmic rays.

The seven colors of the visible light spectrum are: Red, Orange, Yellow, Green, Blue, Indigo and Violet. When all these colors are mixed, we see what we call "white light". When there is no color at all, we see black.

Infrared is used in reflectivity meters, as an identification aid. Visible light reveals the color and beauty of gemstones. Ultraviolet may produce fluorescence effects. X-rays may also produce fluorescence, and may be used for color alteration and to enable us to distinguish between various types of pearls. Gamma rays may be used to alter the color of certain gemstones.