Difference between revisions of "Immersion cell"

Immersion cells are use to hold liquids in which a gemstone is placed. The main objectives are to reduce reflections so one can can get a clearer view of the internal features inside the gem, or as a means to estimate the index of refraction of a gemstone through comparising.
Another use is to estimate the index of refraction of an inclusion in a gemstone (the gemstone itself will act as an immersion cell). 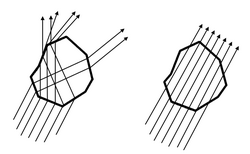 Refraction in a mineral (left) and the lack thereof when immersed in a liquid of equal index of refraction (right).

There are circumstances when one can not use the gemological refractometer but still needs to know the approximate index of refraction of a gemstone. One method to accomplish this is to compare the gemstone with liquids of known index of refraction. 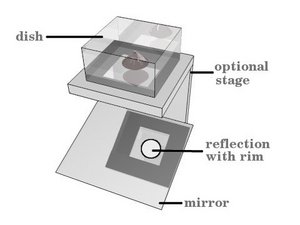 It is no secret that when you insert a drop of water in a glass filled with water, the drop will disappear. Although there are other reasons to why that happens, the focus now will be on the indices of refraction of the drop of water and the water in the glass.

As the drop has the same index of refraction as the water that is already in the glass, light will travel through it at the same apparent speed. This means that the drop of water will not bend the light more (or less) than the water it is now in (the water filled glass); the drop of water will disappear like magic.
If we were to drop a small glass bead (RI ~ 1.5) in the water (RI ~ 1.3) then there is a difference between the two indices of refraction and you will be able to see the glass bead in the water (although not as clearly as when it was in air (RI ~ 1). The glass bead will refract the light more than the surrounding water and this can be a very useful tool to determine the index of refraction of the glass or any other transparent material like a gemstone.

It should be clear by now that the closer the indices of refraction between the two media (liquid and gemstone), the more the stone will disappear when it is immersed in the liquid. 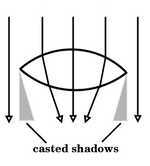 Illustration on the bending of light in a lens.

The famous gemologist B.W. Anderson devised a technique to make this visible with the aid of a series of comparative liquids. This technique is also named the "Anderson immersion method".
When a cut gemstone is placed table down inside a dish of water, the gem will act like a lens if the RI of the gem is larger than its environment (in this case water). Because of the difference in RI between the gemstone and the liquid (not just water) the gemstone will cast an inward shadow on the bottom of the glass. This shadow will be shown as a dark rim around the contour of the gemstone and the wider the rim, the larger the difference in indices of refraction between the stone and the liquid.
By placing a gemstone in a series of liquids with increasing (or decreasing) indices of refraction one can estimate the RI of the stone at hand. The finer the rim, the closer the RI of the gemstone matches the RI of the liquid.

When the stone has an index of refraction lower than that of the liquid, the result is reversed and one will see a bright rim around a darker core.

In order to observe this rim one only needs to insert a small mirror below the glass to redirect the image to the eye. You could of course lift the glass and observe from below, but that would require a ceiling lamp (and in time a physiotherapist).
As the lightsource needs to be above the immersion cell (the glass beaker) it is advisable that the light is diffused before falling on the mirror to reduce reflections from the light source. For this purpose one can use an immersion cell with a frosted bottom or create the diffusion by a thin sheet of white toilet paper (peeled).

The thickness of the rim should always be judged in relation to the size of the gemstone. In other words the shadow is a percentage of the diameter of the gemstone.
When the immersion liquid is water it is obvious that a diamond will show a relative thick rim, while a sapphire will cast a lesser thick one. If you put two of these stones next to eachother in an immersion cell (a small diamond and a large sapphire), odds are that the absolute thickness of the casted shadows are the same or similar. For that reason one needs to estimate the rims in relation to the diameter of the stones.

There are many liquids one can use and in cases that this technique needs to be applied to estimate the refractive index of a gemstone, it is best to immerse the stone in several liquids with progressive RI values. The RI of the stone will lie between the RI values of the liquids in which the stone casts the smallest shadows. In cases where there is no casted shadow, the RI of the liquid is equal to the RI of the gem (like the drop of water in a glass of water). 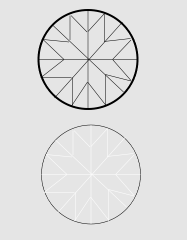 Idealized illustration of the "Becke lines" in the Plato immersion technique.

When the reverse happens (bright on focus above the stone and dark when the focus is lowered into the stone), the stone has a lower index of refraction compared to the liquid. When the RI of the liquid is equal (or almost equal) to the RI of the stone, the edges will remain bright.

Although this technique is fairly straightforward, it does require some practice with stones and liquids of known indices of refraction. Especially trying to focus just above the stone can be cumbersome as the image of the stone is very blurry at that point. On lowering the focus inside the stone more facet edges will start to appear that can provide the information one is searching for.

This technique should not be confused with the color concentration on facet edges in some diffused stones as sapphire.