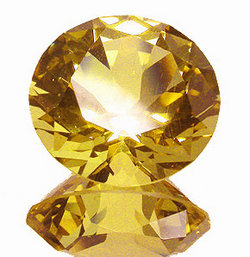 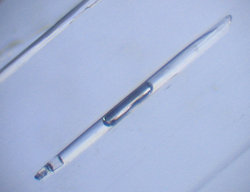 Heliodor is the golden yellow or golden green variety of the mineral beryl. It is a beryllium aluminum silicate. The golden color is produced when iron replaces some of the aluminum in the crystal structure. Heliodor can contain trace amounts of uranium, making it slightly radioactive. Heliodor was discovered in Namibia in 1910 in a pegmatite that also produced aquamarine, which is also colored by iron.
Crystals form very distinct hexagonal prisms that are some of the largest crystal examples in gemology. The largest faceted heliodor, 2,054 carats, is on display at the Smithsonian Institution in Washington D.C.
The name heliodor is Greek, meaning "gift from the sun". This stone is not often used in jewelry because it lacks brilliance and fire. Heliodor is found in Minas Gerais and Goias in Brazil, in the Ukraine in Russia, and also in Connecticut and Maine in USA.
Heliodor is considered a talisman for those named Hugh.