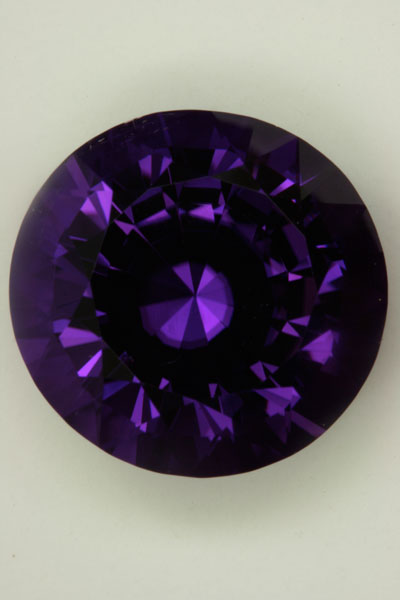 This deep round has 12 mains on the pavilion that are split horizontally and a crown with 12 mains of 42 degrees. It weighs 16.66 carats and has some lop visible dark island like inclusions in small areas of the gem and no feathers, growth tubes or other weaknesses. I was able to get a 41 percent yield from the deeply frosted and rounded rough pebble I asked Brian Norton, a well known dealer out of South Africa to get for me. He had felt that the rough was over priced even though it was presented as a clean, well shaped, neon purple. I wanted the bluish purple color and I was willing to risk a significant amount of money in an attempt to get it. With the discovery of copper in Mozambique and the realization that this purple color was both cuprian and very desirable, I have certainly been rewarded for taking my chance. After all that has been done and said about Mavuco and cuprian tourmaline in Mozambique, Brian feels that this is one of the rarest gemstones to ever come out of Mozambique. It has the power to move me when bright diffused natural light illuminates the gemstone. It tends to loose saturation in incandescent light, but it is still purple with purple flash.

The following 2 pages link to this file: