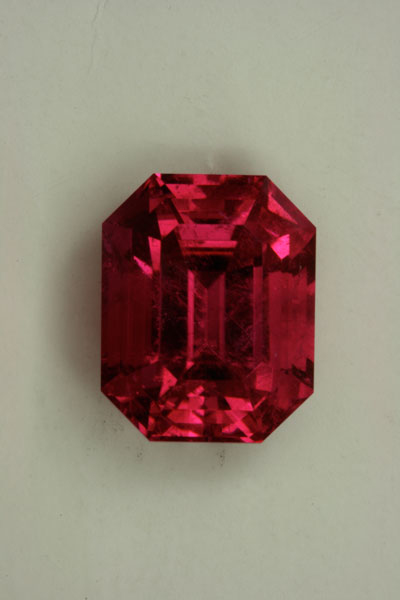 This traditional emerald cut tourmaline weighs 4.39 carats. It is moderately included and it does effect the clarity of the gemstone. A traditional emerald cut is not suppose to be use with included material, especial when the inclusions are under the table. But it is a cut made for color and when the piece of rough demands it and the inclusions are spread evenly through out the rough (or made to appear to be even), it can make a great stone. This is a great stone that is on fire. It comes from Afghanistan and is found in larger crystals that are always included. It was called strawberry by the dealer I purchased the rough from. He dealt directly with one of only a few families that mine and export rough from Afghanistan. The family had experiment with heating/irradiation and cutting in Brazil, with only one large batch of strawberry, but this rough was not part of the experiment. (They did not plan to incur the cost of treating in the future) The spectrum of the gemstones shows that nearly all the manganese is in the 3+ oxidation state which produces a towering absorption peak at around 520nm, giving strawberry its bright clean color.