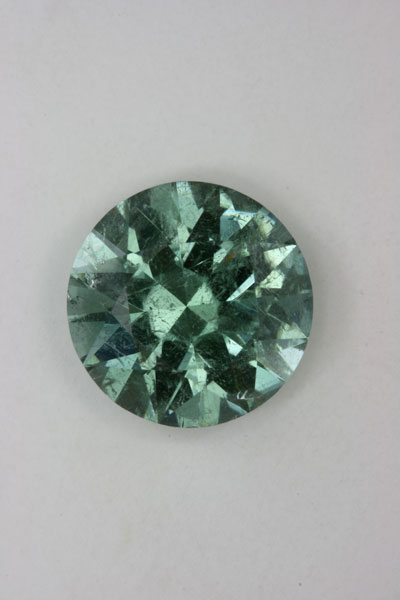 This round standard brilliant weighs 4.95 carats. Its evenly distributed inclusions effect the clarity of the gem. The picture is taken under daylight equivalent lights and gives a good approximation of its green side. Most of the year, the cold part, I work under incandescent lights and I was very surprised to see it turn green after I thought I was working on a blue stone. Now I am not saying that this gem changes enough to be a genuine color changer (greater than 20 per cent change with appropriate luminants in its CIELAB hue angle), but it certainly is much more color active than most blue/green tourmaline. I tested the veracity of my observations on my "innocent" goldsmith friend. After showing the gem to him under his incandescent lights, I asked him to take the gem outside under bright cloudy conditions. He exclaimed it turned all green. I rest my case as he has seen a lot of tourmaline. This gem was one good reason for getting the spectrometer. It had to be different and it showed good indications of copper with the spectrometer. This color instability is in line with what I have observed in cuprian tourmaline, that does not necessarily have good tone and great saturation, but is different.