by Bruce A. Fry

Laurellite is a new variety of Elbaite that I have named after my oldest daughter, Laura. It was first described using the two gems picture and another one I owned, in two articles by the GIA in their Gems and Gemology magazine. Laurellite is the first substance known to science that demonstrates a reverse Alexandrite color change effect.
Laurellite is cuprian Elbaite and is blue green in incandescent light that changes to violet in natural light. Another way of putting this is Laurellite becomes a cooler color in white light that has more red in it and hotter in a white light that has less red in it. The only identified samples of Laurellite have come from Mozambique and have only copper and manganese as chromophores. The levels of both copper and manganese are well within the "normal" range for cuprian Elbaite from Mozambique. The spectrograph of Laurellite does not have any exceptional spikes or features, but both the Mn3+ and Cu2+ absorption curves are shifted toward the red end when compared with cuprian Elbaite with a similar chemistry.
In an attempt to understand the causes of the reverse Alexandrite effect, I supported colormetric research that lead to the publication of an article in the British Gemmological Society's magazine. The Laurellite's unique color phenomenon was used to support a newer theory of color perception and its impact on color change gems. The older theory of strictly using changes in the spectral distribution of different light sources to explain color change in gemstones can not explain the reverse Alexandrite effect demonstrated by Laurellite. The newer theory presented by Yan Lui, coauthor of the article, incorporates the eyes ability to adjust to changing light sources, to maintain color consistency, as well as spectral differences. The eye's ability to maintain color consistency and the areas of the spectrum that are strongly effected by this phenomenon are well known to areas of science that deal with photography, printing, and other sophisticated industries working with color. The two areas of the spectrum that are most strongly effect are the red/orange and the blue/violet. In these areas the CIELAB uniform color world and its simple mathematics does not model real world observations well. Changes in the length of the vector at the same hue angle will produce a different color, not just a more intense color like other areas of the spectrum. 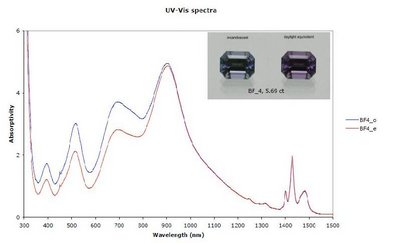 With the discovery of copper as a chromophore in the gem quality Laurellites and the subsequent discovery of cuprian Elbaite in Mavuco in Mozambique, the world of paraiba like tourmaline has become much more complex. I worked with Noel Rowe of RoughToCut, an internet source for rough that has now passed, to circumvent the normal submission of gems to be tested by the GIA, so that the tourmaline with something different, would actually be looked at and not be just superficially reported on. I have sent the Laurellites to Europe, Japan and an assortment of places in the USA to try and understand why Laurellite is different. Better quantitative measurements with LA-ICP-MS have shown a rich soup of trace elements including silver and thorium, but no better scientific understanding. The LA-ICP-MS testing did show that the original Laurellite do not fit into the elaborate data bases laboratories use to determine provenance for paraiba like gemstones. I am actively looking for someone to do unit cell dimension work with Laurellite and have made plans to have lead isotope work done. How much more time and resources are left for the quest to understand Laurellite is presently unknown and changing, because Laurellite is presently being destroyed everyday. Everyday it is heated to the wonderful cyan brightness of paraiba like tourmaline for very good economic reasons. Really, how common Laurellite is and how often it is heated is shear speculation for me, but cuprian Elbaite is rare to begin with and heating it is the common and expect process to produce beauty and wealth. In the few cases that I have been able to read about, the color change is treated as an oddity in the rich world of color in tourmaline and the heating results are wonderful. (I wonder what kind of waves the discovery of a different kind of color change in chrysoberyl would make?)
I joined GO to spread the word about Laurellite and bring understanding and appreciation of tourmaline in general. I can only hope that something of what I have said rings true and you might be sympathetic to saving one of the rarest gemstones in the world, Laurellite, from oblivion like the Paraiba purples.
Bruce

The issue cited in the article from The Gemmological Association and Gem Testing Laboratory of Great Britain is: