The following topics should be fully understood before studying this article.

Total Internal Reflection, or TIR as it is often abbreviated, is a very unique optical phenomenom. Although many aspiring gemologist struggles with this topic, it is fairly easy to understand aslong as you keep a few basic rules in mind.

When light travels through air and reaches an object with a different refractive index (like for instance water, with a RI of about 1.3), two things happen: the light refracts (or bends) inside that object (the water) while other parts of the light will reflect off the water.

Although what we discussed up till now doesn't have anything to do with TIR, it is important to know that light traveling from an optically rarer medium to an optically denser medium will always both refract and reflect.


When we let the light travel from the optically denser material (the water) to an optically rarer medium (the air), that always rule is not valid anymore. Light traveling from the denser to the rarer medium will either:

Which of these paths the light will take depends on the angle the ray of light makes when it hits the boundary between the optically denser and the optically rarer material.
The specific angle, where it will either refract (plus some reflection) or totally reflect (with no refraction), is termed the critical angle. You can think of the critical angle as a turning point.

When the first happens (completely reflect back inside), we talk about total internal reflection.

In the image above the 3 possibilities of light traveling from air into an optically denser material and then towards an optical rarer material (air again) are illustrated. We assume that the hemicylinder (half a cylinder) is glass (RI = 1.54) and the surrounding medium is air (RI = 1).
The dashed line marked "N" and "O" is an imaginary line cutting through the middle of a hemicylinder, this imaginary line is termed the "normal" and from this line the angles are measured. The normal is perpendicular to the flat top of the hemicylinder. A hemicylinder was chosen for illustration as any line going to the center point of a cylinder will reach the outer boundary at 90° as illustrated by the dotted lines. Any ray of light reaching a boundary at 90° will not be refracted.
The critical angle (ca) is the outer limit of the area between the normal and the red line.

Note: the colored lines are differently colored for illustration purposes, they could all have been blue, or green or red (or any other color).

This theory is very important to understand as it the basic principle behind gemcutting and the refractometer.
In diamond the angles at which the pavillion facets are cut are determined by the critical angle (abbreviated by ca).
The refractometer makes use of this phenomenom by showing which parts of the light on the refractometer's scale are from reflection and which from refraction. 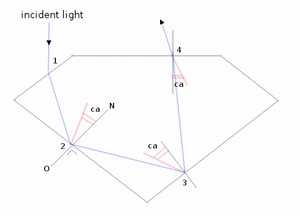 Total Internal Reflection in a Diamond.
Light reaching the facet at an angle larger than the critical angle will be reflected.

In 1919 Marcel Tolkowsky published his "Diamond Design - A Study of the Reflection and Refraction of Light in a Diamond" in which he described how to use total internal reflection to get the most light return by a diamond. That was the birth of the modern brilliant cut in which most diamonds are fashioned.

He calculated the angles of the different facets in a way that all light entering through the top (the crown) of the diamond would be internally reflected on the back facets (the pavillion) and guided back to the top, where the light will exit. This causes the brilliance for which the brilliant cut diamonds are famous.

The light enters through the crown (point 1) and reaches a pavillion facet at point 2. As the angle of the incident ray is larger than the critical angle, it will be internally reflected towards point 3. At point 3, the incident ray is also larger than the ca, so again the light ray will be internally reflected. When the light reaches point 4, it reaches the boundary between the diamond and the air at an angle smaller than the critical angle and it will refract out of the stone, following Snell's Law.
In other words, the pavillion facets act like mirrors that send the light back.

Schematic overview of the Total Internal Reflection in different cuts

When the angles are not correct, light may leak out of the side of the brilliant, causing a less attractive diamond that seems to have "windows" in them. Windows are areas where you can almost look through the stone.

Total internal reflection in a refractometer

The refractometer is one of the most important tools in determative gemology and although you don't need to know how it works in order to operate it, the knowledge will make you much smarter and it is quite satisfactory to the mind if you do understand it.

While we previously talked about light traveling from a gemstone (such as diamond) to an optically rarer medium (air), the theory also works for every other two materials with different refractive indices that are in contact with eachother (such as diamond and glass). The rule that light should travel from the material with the higher refractive index (the denser medium) to a material with a lower refractive index (the rarer medium) still applies. It doesn't work vice versa. 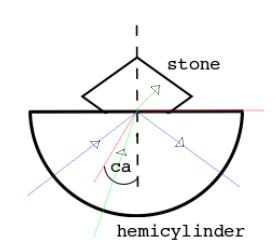 Inside the refractometer: Total Internal Reflection

When we take a hemicylinder made of a glass with a high refractive index (~1.89) and place a gemstone with a smaller refractive index on it (such as a sapphire with RI ~ 1.76), then the hemicylinder will be the optically denser medium and the gemstone the optically rarer medium.
When light is guided through the hemicylinder towards the gemstone, total internal reflection can happen and the rays of light that are internally reflected can be observed as a bright area on the refractometer scale. That is the basic principle behind the gemological refractometer.