Difference between revisions of "Ametrine" 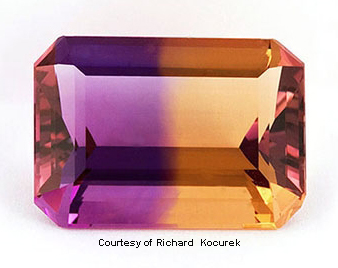 Ametrine is a variety of quartz that contains both amethyst and citrine sectors in the same crystal.

Ametrine is only found in one mine in the world. The Anahi Mine in Bolivia is the major world producer of ametrine. The mine first became famous in the 17th century. A Spanish conquistador received it as a dowry when he married a princess from the Ayoreos tribe named Anahi. Ametrine was introduced to Europe through the conquistador's gifts to the Spanish queen.

Synthetic ametrine is now produced in limited quantities in Russia.