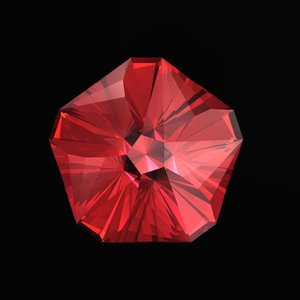 Rendering of the design in corundum 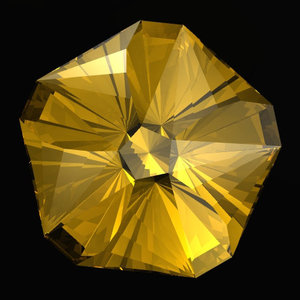 Rendering of the design in citrine quartz

This design is aimed to obtain a stone reminding of a poppy. The 5-fold symmetry seemed the best and the 5 fans on the crown help to mimic the curling of the petals. The intended reflections pattern does not change much from quartz to corundum RI's. Materials with higher RI's would be pleasant as well, but the center of the stone (the area around the little table, will be more "confusing").

I plan to test cut this one in a pretty citrine quartz to get a golden poppy gem that will remind me of California. I think it would be very pretty also cut in a reasonably large synthetic ruby.

If you cut this design please consider posting a picture in this page.

I've just noted that the symmetry of the Californian golden poppy is 4-fold... this means I'll have to think about a new, more realistic, design...