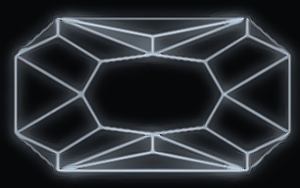 For me, the faceting diagram is a visual aid and a great starting point, but understanding the geometry of the angles and indexes lets me make (usually) intelligent choices on the fly and fix problems as they happen. Julia Child once commented as she picked food off the floor 'No one knows what happens in your kitchen but you." No one knows what happens at my machine but me. If the stone is beautiful and the yield is good, then I've done my job no matter if the stone resembles my initial cutting plan or not!