The sublimation method to create synthetic materials is a method where a solid is heated at appropiate temperatures and pressure, usually in a near vacuum, so that it goes from the solid state directly into the gaseous state, skipping the liquid state. The gas then condenses as a solid, again skipping the liquid state. A material famous for this is CO2 (dry ice); at room temperatures and normal atmospheric pressure this solid block of ice will immediately sublime into a gas.
Synthetic moissanite is the main synthetic gemstone produced by this process.

There are several different setups to accomplish this, most of them use a seed plate and a powder source. Another way is by the use of gasses and a seed plate. 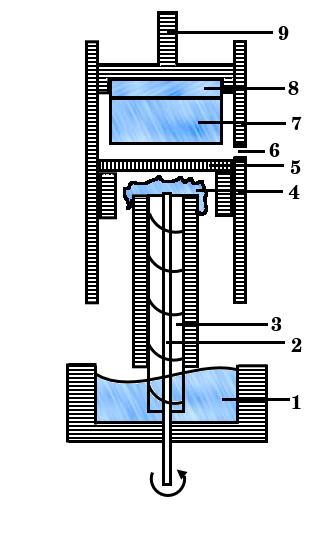 Below follows a summary of the sublimation method used to create synthetic moissanite (silicon carbide), for a detailed explanation we refer to the patent description.

On the left is a cross section of the cylindrical graphite crucible that is held inside a larger, evacuated, furnace.

A powder of silicon carbide (1) is transported by a screw (3), that works like an Archimedes Screw, just underneath a porous graphite plate (5). That screw is rotated by a rod (2).
When the powder reaches the stage just below the porous plate, it is heated at around 2,300° C and the powder goes into the gaseous state (4). This temperature is the sublimation temperature.

An opening (6) in the, annular, graphite crucible holds an optical pyrometer that monitors the temperature of the seed's or growing crystal's surface. The seed crystal (8) is held by a mount (9) that in some setups can be lowered/raised/rotated depending on what the pyrometer indicates.

Silicon carbide is a good semi-conducter with a large bandgap (+3 eV) and one could expect the produced crystals to be colorless. However n-type dopants (nitrogen) in the furnace create color centers. This is solved by adding an equal amount of a p-type dopant (aluminium) to the powder source, in effect canceling eachothers color centers.

In this adaption, the powder is substituted by two gasses, silane (SiH4) and ethylene (C2H4). When these two gasses combine together at a temperature of about 2,400° C, they will react and form a silicon carbide gas. This gas will then condense the same way as the powder source.