Heavy liquids are substances in liquid form that have a known Specific gravity (SG) and are used as a means of quick separation of stones with similar appearance. In general, these liquids are highly toxic and precautions should be taken when used.

Heavy liquids are stored in the dark to prevent light from influencing their physical properties. The containers need to be stored closed with a stopper to prevent evaporation. 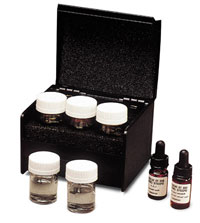 Always use heavy liquids in a well-ventilated environment. They should be kept away from children and pets.

Use of heavy liquids

The use of heavy liquids is fairly straightforward. When a stone is immersed into the liquid, it will either float, suspend, or sink.

When the SG of the liquid is known, take the gemstone in your tweezers and gently lower the stone in the liquid. Observe the stone while looking through the side of the bottle and take the stone out again with your tweezers.
Carefully rinse the stone and tweezers under streaming water (you might want to take precautions to not let the stone go down the drain with the water), or you could rinse it in a large beaker filled with clean water.

After your observations, you should be able to tell if the stone’s SG is higher, lower or equal to the heavy liquid used.

One can also observe to which degree a stone will sink or float after suspending it in the liquid.
For instance, when the stone sinks rapidly it will have a far greater SG than the liquid.

In addition to these four there is Clerici Solution with a SG of 4.2, used in laboratories. This solution can be diluted with water to lower its SG, such as SG = 4 or SG = 3.52 for instance. This solution is extremely toxic and should only be used in a well equipped laboratory with additional safety precautions such as an acid chamber.
Dr. W. Wm. Hanneman suggests the use of Sodium Polytungstate as a non-toxic alternative for most heavy liquids.

Aside from these, there is also a water/salt solution for identifying Amber.

Methylene Iodide diluted with Toluol has an SG of 3.05. This liquid can easily separate Tourmaline (3.05) from Topaz (3.5) because Tourmaline will suspend in this liquid while Topaz will sink.

Undiluted Bromoform has a SG of 2.85 and can be calibrated to a lower SG with the addition of Toluol.

Diluted Bromoform with an SG of 2.65 is the indicator for Quartz.

This highly toxic Thallium-based liquid has a SG of 4.2 and can be diluted with water to calibrate it for Corundum (4) or Diamond (3.52).

Sodium Polytungstate is a commercial, non-toxic and odor free alternative for most heavy liquids. It is sold as a white powder to which water is added to form a solution. The upper value of the saturation is 3.10. By adding water, it can go down to whatever SG is preferred.

Another common heavy liquid is Lithium Metatungstate (LMT). It is sold at 2.95 specific gravity and can be diluted with distilled water down to 1.0 Specific gravity. LMT is safe to use and it is the most affordable inorganic heavy liquid on the market. Visit LMTLiquid.com for more information.

When 7 grams of ordinary salt (Halite) is saturated in 50cc of water, a solution with density of 1.12 is created. This permits Amber (SG = 1.08) to float in it while some simulants (most of which - but not all - are plastics) sink.

Generally, one calibrates a heavy liquid by dropping a calibration stone slowly into a liquid and diluting it drop by drop until the stone of known SG suspends in it.

Back to Hardness for: Hardness Pencils or Hardness Points
Next: Inclusions